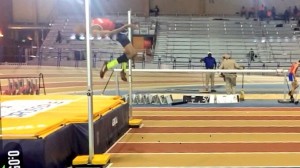 The top 8 jumpers on Homewood’s Indoor Track and Field team opened up their indoor season at the Magic City Invitational on Saturday at the CrossPlex in Birmingham. It was a really special day for Kiara Williams because she committed to the University of Alabama and broke two records at the meet. Kiara won the long jump with a jump of 18 ft. 10.25 inches and broke both the meet and CrossPlex records. She also won both the triple jump and the 60 meter hurdles. Elysa Griffin placed 3rd in the long jump, and the varsity girls placed 3rd overall out of 65 teams even though only three of our athletes competed.

The varsity boys were led by Alazae Hester-Taylor who had a strong opening by winning the high jump, placing 2nd in the triple jump, and placing 4th in the 60m hurdles. The boys placed 7th overall even though only five athletes competed. The full squad will be participating at the Ice Breaker Invitational on Saturday, December 13th.