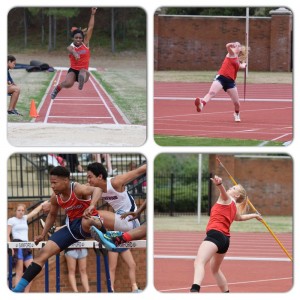 The Homewood track and field program had four athletes sign their National Letters of Intent on Wednesday, April 15.  There will be others to sign later at the banquet, but the following signed on Wednesday.

Sarah Blake (Kentucky) – Sarah is one of the best throwers in Alabama’s history and ranks 13th on the all-time list for the state; she is Homewood’s school record holder.  She earned All-State honors last year in both javelin and discus and helped lead the girls team to an outdoor championship.  This year, Sarah has the best javelin throw in any classification.

Sarah Crocker (Montevallo) – Sarah is second on Homewood’s all-time list for javelin and is one of the best throwers in the state this year.  She was 4th in the event last year and helped lead the girls to the outdoor state championship.

Kiara Williams (Alabama) – Kiara in one of the top track and field athletes in the U.S. and has won 8 individual state championships in hurdles, long jump, triple jump, and sprints.  Kiara has earned individual All-State honors 12 times and been on two state championship relay teams.  She was the leader on the team that won the outdoor championship last year and also led the team to three indoor state runner-up trophies.