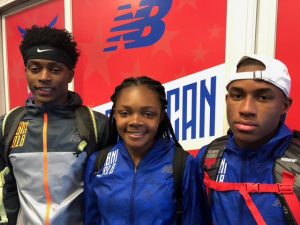 The Homewood Track and Field teams have had an outstanding start to the outdoor season, and three athletes concluded their indoor seasons this weekend by competing at the New Balance Indoor Track and Field National Championships at the New York Armory.  Josh Thomas competed in the Championship division and finished 27th in the U.S. by jumping 45’4″.  Stephon May had a personal best in the high jump of 6’5″ and placed 3rd in the Emerging Elite division.  Aiya Finch jumped 37’2″ and placed 11th in the Emerging Elite Triple Jump.

There have been two varsity meets and one JV meet to start the outdoor season.  Both teams won the Battle Royale at Mountain Brook on March 2nd.  The girls were 2nd, and the boys were 3rd behind 7A teams at a meet hosted by Hewitt-Trussville on March 8th.  Both teams are currently ranked first in 6A.  There have been many exceptional performances in the first two weeks of the season, but the highlights have been those athletes who have broken school records at this early point in the season.  The girls 4x100m relay team of Christian Hill, Briana Rapley, Makiyah Sills, and Jasmine Griffin won both meets and broke the school record by running a 48.39.  Patrick McMahon (discus, 145-6) and Alex Brooks (pole vault, 11-4) also broke the existing school records.

The Homewood Invitational is Saturday, March 17th and the next varsity meet for the Patriots.  See the following link for the time schedule.  https://www.homewoodtrackandfield.com/homewood-invitational.html