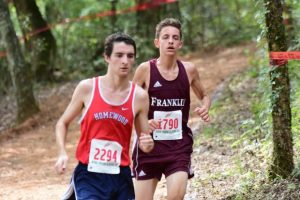 The Homewood Cross Country teams have had an outstanding season so far, and both the boys and girls are #1 in 6A at the midway point of the season.  Most recently, the Patriots had an outstanding meet at the Jesse Owens Classic, which is one of the largest meets in the Southeast with over 200 schools attending.  The boys were 4th in the gold division and were the 3rd team from Alabama behind 7A Huntsville and 5A Scottsboro.  Will Stone led the team by placing 3rd, and Jack Gray, Jon Fielding Stogner, Carson Bedics, Brady Cassell, Logan Justice, and Connor Warren all ran extremely well to round out the top 7.  The girls were 5th in the gold division and were the 2nd team from Alabama behind 7A Auburn.  Lainey Phelps led the team with a 6th place finish.  Celie Jackson, Victoria Thompson, Edie Smith, Zoe Nichols, and Audrey Nabors were the top 6 runners on the team and helped the girls earn their best finish ever at the Jesse Owens Classic.  The JV races went well also with Jack Harchelroad winning the race with a huge personal best.  Maddie Garrity was 9th in the JV Girls division and led them to a 3rd place team finish.  The varsity teams will be traveling to Atlanta to compete this weekend.