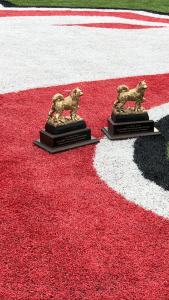 Both the girls and boys teams ended the regular season by winning the Hewitt-Trussville Invitational.  Sectionals are coming up next weekend, and the AHSAA State Championships are the first weekend in May.  Will Stone (800m, 1 mile), Makiyah Sills (100H, 300H), and Aiya Finch (Long Jump, Triple Jump) all led the way at Hewitt-Trussville with two event wins each.  Lainey Phelps won the 1 mile, and Alex Brooks won the pole vault.  Alex broke her own school record and set a new personal record with a jump 12-0.

The Patriots competed at the Mountain Brook Invitational on April 12th-13th but had many athletes missing the second day because of prom.  However, there were still some outstanding individual performances.  Lainey Phelps won the 2 mile with an impressive time of 10:57.24.  Alex Brooks won the pole vault (11-6), and Will Stone won the 1 mile (4:19.72), which is just off the school record.  Additionally, Aiya Finch finished 2nd in the Triple Jump (38-3), and Crawford Hope was 3rd in the 2 mile (9:31.72).  Eli Brooks set a new personal best and tied the school record in the pole vault with a jump of 14-0.

Homewood also competed in the JV Championships last Wednesday and had some strong individual performances.  Celie Jackson, who has been recovering from hip surgery in December, made her return by winning the 800m.   Ebony Williams also had an event win in the 100m hurdles.  The following all had strong performances by finishing in the top 3 in their events: Ellen Reidinger (3rd in 800m), Zoe Nichols (2nd in 1600m), Alex Steltenpohl (3rd in 1600m), Bailey Bodkin (2nd 100mH), Anna Grace Gibbons (2nd 300mH), Sara Hightower (3rd in Long Jump), Brinley Cassell (3rd in Javelin), David Huynh (3rd in 110H), and Gabe Madden (2nd 300mH).