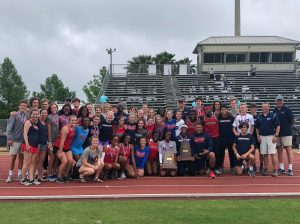 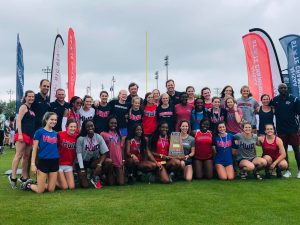 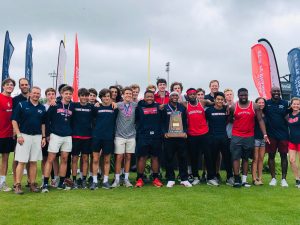 Will Stone capped off his stellar career by winning four gold medals (800m, 1600m, 3200m, and 4x800m) for the second year in a row.  Will is finishing his career as the most decorated Homewood athlete ever with 14 individual championships.  Makiyah Sills led the girls team in points scored by winning both the 100m hurdles and the 300m hurdles.  Sills was just .02 off setting the state record in the 100m hurdles, and she also got 2nd in the 100m and 3rd in the 4x400m.  Josh Thomas (Triple Jump and 110m Hurdles) and Lainey Phelps (1600m and 3200m) also won multiple individual titles.  Additionally, Aiya Finch (Triple Jump) and Maggie White (Discus) won individual titles.  The boys 4x800m of Logan Justice, Crawford Hope, Jack Gray, and Will Stone won the title with an impressive time 8:00.01.  There were many incredible performances from Homewood athletes, and a summary of those and team results are below.

Girls 6A – Team State Champions: Six Championships in a Row