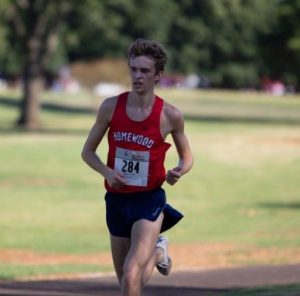 The Patriots competed this past weekend at The Southern Showcase in Huntsville, AL at the John Hunt Running Park. This meet brought some of the top teams from all over the state and Tennessee to compete against one another on a brand new course. Both teams competed well and continue to be ranked 1st in 6A with some outstanding performances across the board.

Crawford Hope led the Varsity Boys team with a third place finish overall (15:29), and was followed closely by teammate Jon Fielding Stogner who ran a new PR of 15:42. The other three runners who helped to round out the top five for the Patriots included Sam Gray (16:43), Grayton Murray (16:55), and Andrew Laird (17:08). These five runners helped to secure a fifth place team finish and first 6A team. Lainey Phelps continues to lead the girls team and ran an outstanding PR of 17:36 which currently is ranked 1st in Alabama and 32nd in the nation. Celie Jackson (20:39), Maris Owen (20:47), Laura Kemper (21:11), and Lily Blish (21:22) helped to round out the Varsity Girls team and lead the team to a top five finish behind two Tennessee teams and Vestavia.

Furthermore, both JV teams had strong performances led by freshman runners Marin Poleshek (20:44) for the girls and Ben Murray (17:48) for the boys. Both athletes led a strong group of runners to strong team finishes and also both ran personal bests for cross country. Homewood will compete again at the Jesse Owens Classic in Moulton, AL on Saturday October 5th.